Gain: How Alex launched and promotes The Ostium Podcast

Today, we’re speaking with Alex C. Telander, the creator of The Ostium Podcast. Ostium is a secret town where there are many doors that lead to different places in time and space. The podcast launched January 2017 and is based in Cotati, California.

Welcome to Gain, an interview series where we ask podcasters about the backstories of the great work they’re creating.

Today, we’re speaking with Alex C. Telander, the creator of The Ostium Podcast. Ostium is a secret town where there are many doors that lead to different places in time and space. The podcast launched January 2017 and is based in Cotati, California.

Listener Page Chase says about the show: "Ostium is a world, for all of its unpredictability and danger, that I would actually want to visit if it really existed. Plus, it looks like all the weirdness and plot threads are actually coming together. It feels like there's an actual plan for how this will end, as opposed to some other stories that either pulled something out of nowhere or meandered to the point where no questions were ever actually answered. This small, but passionate crew handles storycraft and world-building well enough to go toe to toe with the bigger audio dramas."

After getting hooked on audio dramas like Welcome to Night Vale, Limetown, and The Black Tapes, as a writer I thought I’d have a crack at creating my own. I began the story in the Bay Area where I live, with a simple game of Geoguessr (the popular Google game) that takes the main character, Jake Fisher, to a secret town far north, and inside that town I discovered the many mysteries Jake did.

It became pretty obvious once I knew my story involved a lot of doors: Ostium is Latin for door. In the long run, it was pretty clever of me – nice job past me! – as it’s a very unique name and easy to find.

Who was the first person you told about your podcast?

My good friend and the voice actor who plays Jake Fisher. I knew I wanted to use him to voice my character before I even told him about the podcast, because I’d worked with him before with his online zine the Late Late Show and knew he had a great voice for podcasting. And once I told him what the story was he became completely hooked.

When did you announce your podcast’s existence to the world? How did you do it?

The first episode launched on January 1, 2017. After a couple years of writing, revising, recording and editing, we announced the show to the world over the summer of 2016 through the Ostium social media accounts: Twitter, Tumblr, Instagram, Facebook, as well as friends and family. Starting in September I ran a series of teaser photos I’d been taking of interesting and strange-looking places and roads to entice potential listeners. 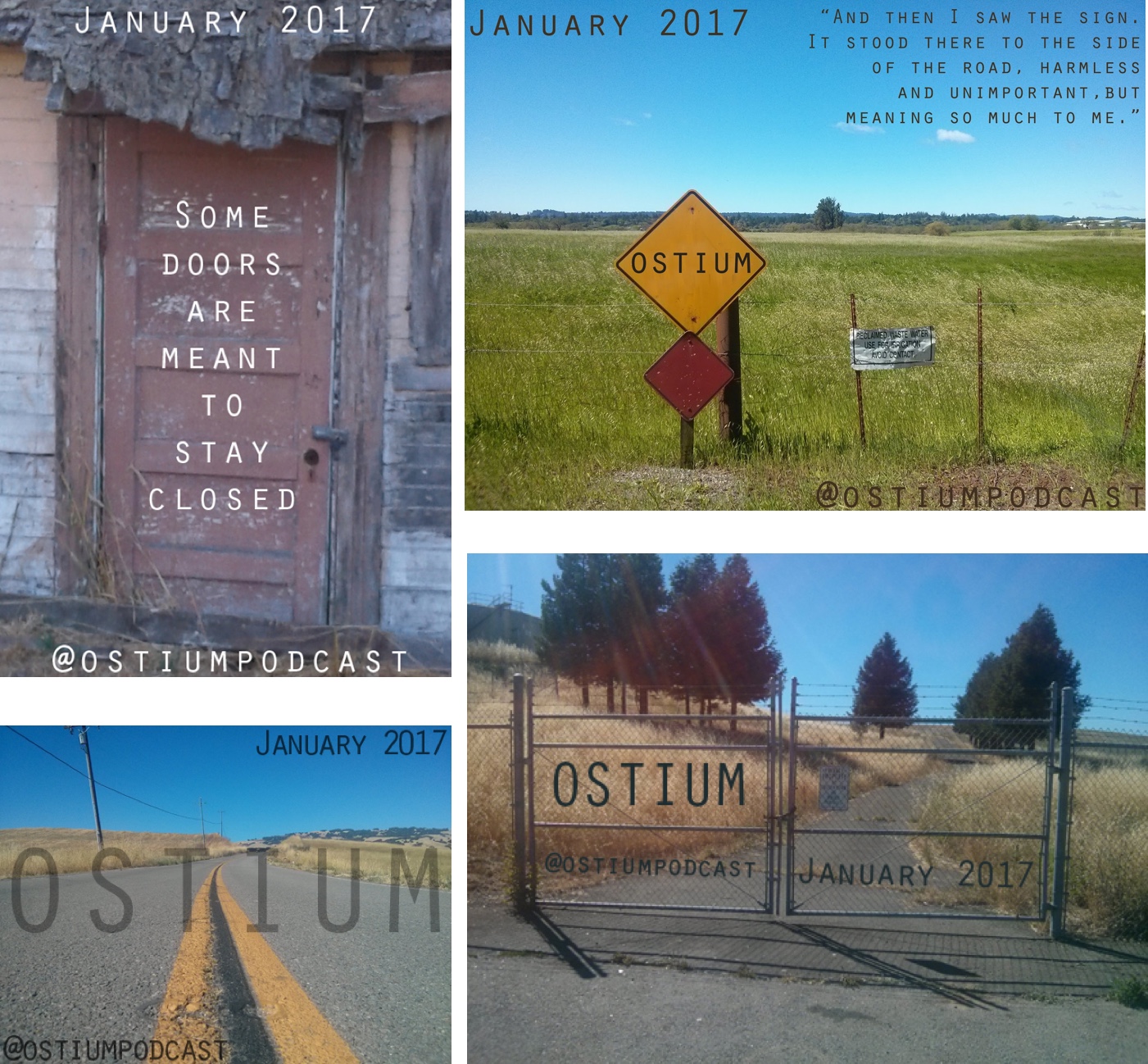 In December we released a couple audio teasers to give listeners a hint of what the show was about.

Why did you want a podcast website for The Ostium Podcast?

I needed a place for people to go when they heard the name of the podcast. It’s what I do whenever I hear something interesting I want to learn about: I Google it. I knew I would need a good website with all the info people could think to need and an easy to find name, hence ostiumpodcast.com.

You publish a new episode of your show. What’s your approach to promoting it?

If there’s one thing I’ve learned about podcasting (and I began with nothing and learning from listening to other shows), it’s that you need to be consistent and have a set schedule. When we start a season, you know you’re going to get a new episode every two weeks by Sunday morning until the end of the season. When each new episode is released, it’s blasted across many social media platforms, as well getting a number of retweets from fans. And for those who subscribe, it gets downloaded into their podcatchers.

On Instagram, I post images of iTunes reviews with fans showing their love for the show, and try to entice new fans to leave reviews in exchange for a cool Ostium sticker. I have fun with these sometimes: 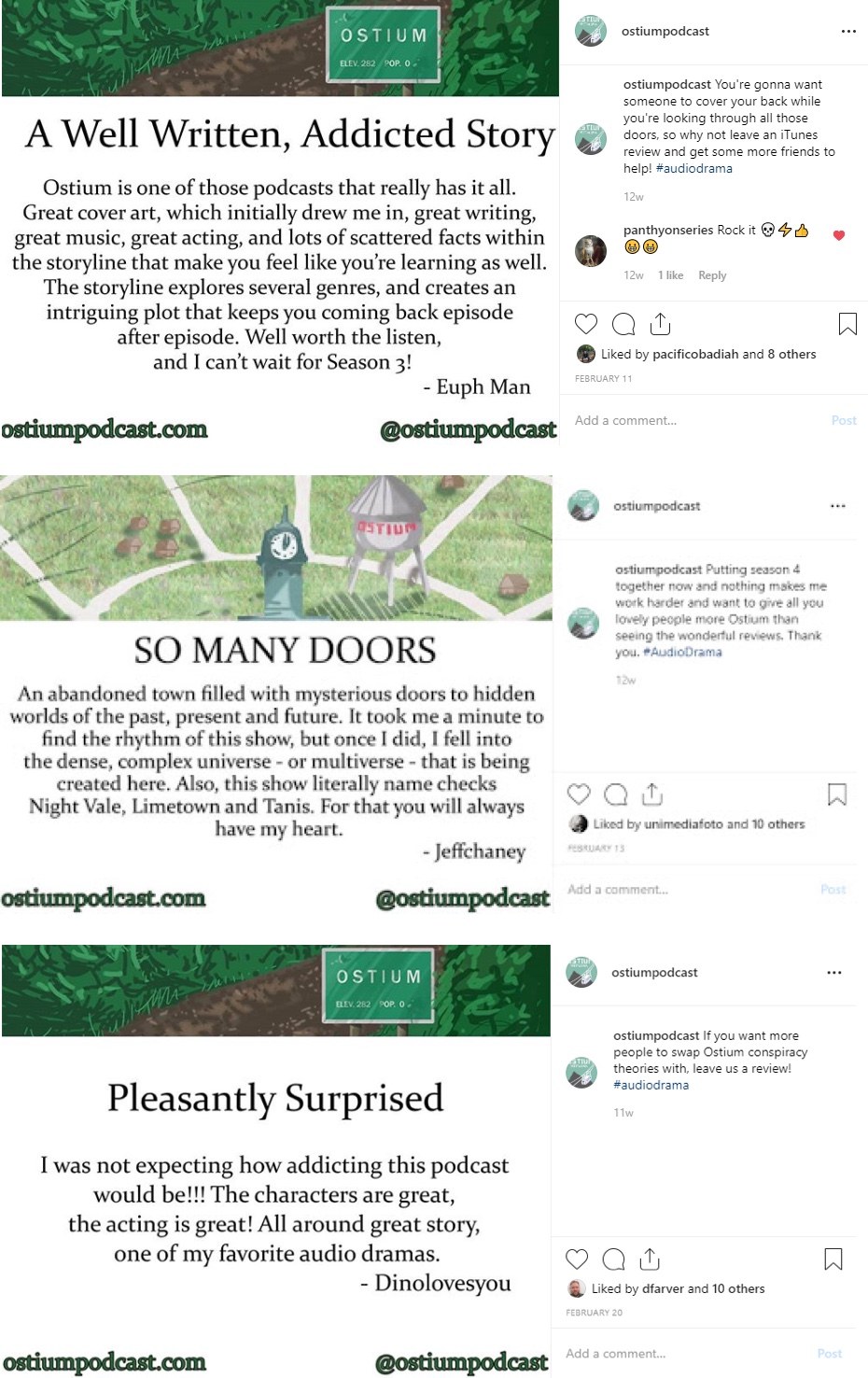 Now for Patreon I do something special: each new patron that signs up at whichever level gets assigned a specific door number and eventually that patron will get their own little “door story” on Patreon about what might be behind their specific door.

Audio dramas get to have a lot of fun with social media and are often very creative, such as Greater Boston giving daily updates about Boston news and activities, Marsfall delivering ANDI thoughts (that’s the AI from the show), and Kalila Stormfire’s Economical Magical Services tweeting out spells. For the Ostium Twitter I do at least get to use the 🚪 emoji a lot.

For my personal Twitter, @bookbanter, I spend over half my time talking about the many podcasts I enjoy and recommend many different ones to people. Whenever I see someone asking for recommendations, I immediately give them a long list. I even have a comprehensive recommendations list on the Ostium website.

Ooh, that’s a tough question. I love all my episodes. But if I had to pick one, it would be the Season Two finale, Episode 20: Once More with Feeling. If you don’t want spoilers, skip ahead to the next question.

Basically, a big event happens at the end of the previous episode, and Jake has to time-travel and visit every place he already went over the whole season and has to avoid running into his other self. It was a tough episode to write, structurally and creatively, and even harder to edit together, but I’m really proud of the result, and it ended up being the longest episode to date, over an hour in length.

Describe a recent time you talked about your podcast in person. Who were you talking to? What did you say to help them learn more about your show?

At Podcon 2 in January, I spoke with lots of potential fans on the floor, at panels, and at Meet & Greets. I had my business card ready and kept it simple: I told them it was a show about a guy who finds a secret town where there are lots of doors and each one leads to a different place in space and time. This is usually enough to hook them, and if they want more specifics, I talk to them about where some of these doors lead: Roanoke, the deck of the Mary Celeste, and even Mars. There’s no limit to where you can go with Ostium! 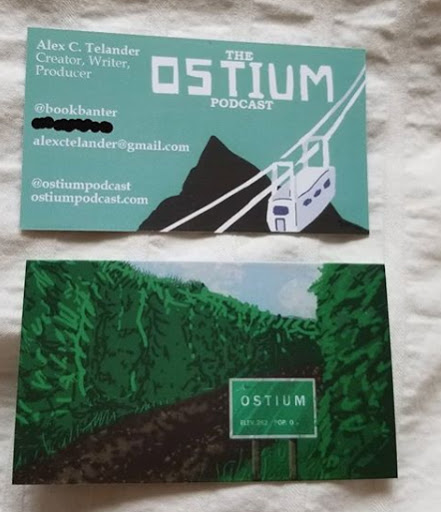 When you record your podcast, you might think about your imaginary listener who will hear this episode soon. What’s your mental image of this listener, and how do you incorporate their needs into your recording?

I don’t have a specific person in mind when I’m putting my show together because we recently hit half a million downloads, which is just incredible, and I’ve met and interacted with a lot of the fans. They’ve made me realize that Ostium has grown and become more than just a little story I’ve made up. It’s so thrilling and exciting to talk over where they think they show is going to go and what’s going to happen to the characters next.

As a matter of fact, there’s one fan I’ve become very friendly with, Dwayne Farver (we did get to meet at Podcon!) and I’ve invited people to submit their own “Ostium door story.” Dwayne has wanted to write for some time and decided to give it a shot and came out with a great story about a town called Centralia near to where he lives. Long story short, he has now created and written his own audio drama that is a spin-off show for the “Ostium Network” which will be debuting in September, called Manifestations. I also now do “Behind the Scenes” episodes on Patreon for our patrons where Dwayne and I discuss and debate all things Ostium via Skype.

Our fans come from all walks of life and are all types of people. Honestly, when I’m writing and editing the show, I’m making it for myself and what I look for in a good, gripping, engaging story that keeps me hooked, and then I try to make it the very best I can. One other thing I continue to do is remain true to the characters when I’m writing: they always know where their story is going next and they have never steered me wrong.