Gain: How 70 Million uses annotated transcripts and toolkits to assist in audience development and engagement

We caught up with 70 Million’s publicity and audio marketing specialist Kate Krosschell to learn more about the development and distribution of the show as Lantigua Williams & Co launched the second season in July 2019.

The podcast 70 Million addresses criminal justice reform head-on through on-the-ground reporting from communities that are finding solutions. We caught up with 70 Million’s publicity and audio marketing specialist Kate Krosschell to learn more about the development and distribution of the show as Lantigua Williams & Co launched the second season in July 2019. The show is made possible by a grant from the Safety and Justice Challenge at the John D. and Catherine T. MacArthur Foundation. 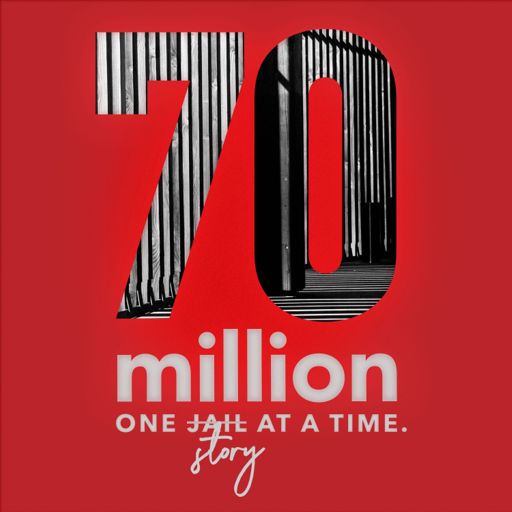 What’s the origin story of 70 Million?

Creator and executive producer Juleyka Lantigua-Williams was inspired to create 70 Million following her time as a criminal justice reporter at The Atlantic. She was deeply committed to raising awareness about the injustices that often trap people in the overlapping systems of justice at work in the U.S. But she also knew that there was a huge chasm between the knowledge that circulated among practitioners and advocates and the general public’s understanding of the urgent need for system-wide reform. She imagined 70 Million as a bridge between those two worlds, where stories of real people affecting change locally could help bridge the information gap in a format that is widely accessible and free to the listener.

70 Million *is an open source podcast. What does that mean? How has open sourcing your podcast expanded your audience?

Open source means that anyone can use the episodes and their accompanying materials like annotated transcripts, syllabi, and other resources that we’ve paired with the audio without having to pay for it. We’ve had a lot of great feedback, especially from educators at universities who have used 70 Million and accompanying materials in their classrooms. We’ve found that being open source allows more people to listen to the podcast who might not be die-hard podcast listeners but who approach the subject matter from other angles thanks to the content, like policy workers, public defenders, DAs, etc.

Why did you want a podcast website for 70 Million?

We knew that we wanted a central location for all of our materials. It wasn’t just a marketing decision, although having an easy URL to direct people to who may not know how to listen to a podcast on a listening app also helps by serving as a central hub for all our digital marketing. We saw the site as a way to aggregate all our materials in a one-stop-shop. That way, folks who discover us in other ways, like on our media partners’ sites like The Vera Institute for Justice’s blog, can easily make the transition from reading about us to listening to us or exploring our resources.

Which episode serves as a good starting point for a new 70 Million listener?

The episodes don’t need to be listened to in order, but I suggest starting from the beginning. Reporter Jesse Alejandro Cottrell’s piece about Pima Country, Arizona is a great introduction to the dueling forces at play in our criminal justice system in the United States. That episode chronicles how meaningful reforms at the local level there have resulted in less overcrowding in jails, but a federal program designed to stop trafficking at the border simultaneously counteracts these efforts by sending people to jail over minor offenses like traffic violations. Our goal with the episodes is to amplify these changes at the local level so listeners have a blueprint for reform work if they’re inspired to get involved.

There are two special resources on your podcast website: annotated transcripts and reform toolkits. What do these provide for a listener?

Following the first season, we did a listener survey, and we heard from our audience that they wanted more resources and ways to get involved. So, we decided to annotate our transcripts. Transcripts not only give folks with hearing challenges a chance to consume the stories, but now with the added annotations, they also house links to news, data, and other established reporting on the topic within criminal justice that we cover in the episode. This way, listeners can dig deeper and inform themselves as they get involved in reform efforts.

The reform toolkits go a step further: in a series of slides, they give a blueprint in a “Who, What, When, Where, Why and How” structure for anyone to apply the reforms we lay out in the episodes in their own communities. We want the toolkits to help listeners ask the right questions when working on grassroots reforms, ie: What do we want to accomplish? How achievable are our goals? What’s the timeframe and deliverables? And then you’re guided through how the specific reformers in the story we highlight on each episode tackled those questions.

We publish the toolkits and annotated transcripts along with the episode, and you can easily find the toolkits in the show notes for each episode (and they’re sent out in our newsletters to accompany the episode, too).

When you record your podcast, you might think about your imaginary listener who will hear this episode soon. What’s your mental image of this listener, and how do you address their needs in your recording?

I wouldn’t say we have one image of a listener, but rather multiple. Addressing their needs means de-complexifying our complicated current criminal justice system by featuring stories of real change at the local level that’s working. I would hazard that the general public has an incomplete understanding of how the problem of mass incarceration is compounded by local jails because of factors like legal silos, law enforcement policies that counteract each other, and racial and socioeconomic inequality. We want to illuminate the deep systemic issues at work in an understandable way, while also showing that reform is possible. That means that the stories we amplify, and the people that might listen, are as diverse as the people impacted by incarceration in the United States, so we want to center those folks.

Annotated transcripts and toolkits are two ways to increase the number of touchpoints for interested audiences to find your podcast. Learn more about how original articles on your podcast website help new listeners discover your show.